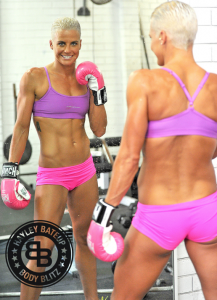 Hayley Bateup from the Gold Coast, Australia who has an amazing amount of achievements including 20 x Australian Gold Medal winner, 5 x Australian Board Champion, 3 x Coolangatta Gold Champion, 2001 Australian Ironwoman Champion and Professional Iron Woman, has answered some very personal questions, which we are sure you are going to love:

1. FAVOURITE MEAL:  Duck pancakes
2. FAVOURITE ATHLETE:  Mick Doohan
3. FAVOURITE TV SHOW OR MOVIE:  The Notebook
4. FAVOURITE BAND/SINGER:  Johnny Cash
5. DO YOU HAVE ANY HOBBIES (besides the obvious): Riding, Surfing, Fishing, Movies,
Friends and Camping.
6. NEXT GOAL: Build BodyBlitz to Online, go as far as possible in cycling
7. WHERE DO YOU LIVE & WHY: Currumbin. It used to be where our beach house was as kids and we eventually moved here.
8. WHAT DO YOU DO WHEN YOU ARE NOT WORKING: Rest
9. WHAT IS SOMETHING QUIRKY ABOUT YOU OR THAT YOU DO: Bit of OCD with a lot of things.
10.FAVOURITE PIECE OF PUNCH GEAR & WHY?: My pink gloves. Love the colour and quality of Boxing Gloves.

May 16, 2015 Interviews
<< 10 Best reasons for choosing Punch Equipment®
Wanna Be A Kickboxer Challenge >>