Girl puts on the boxing gloves to fight boy

HomeFighters Girl puts on the boxing gloves to fight boy 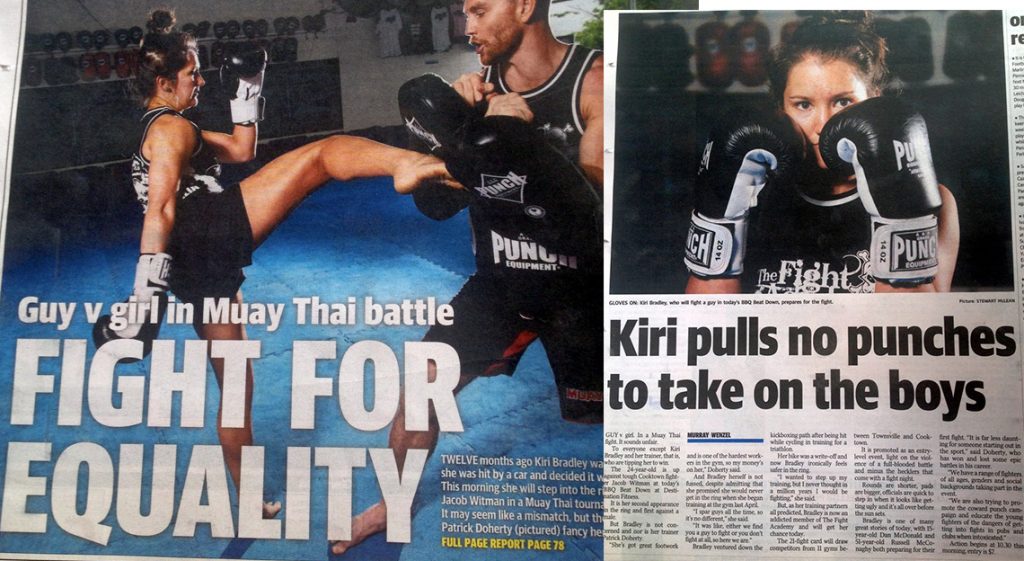 Guy vs Girl in a Muay Thai fight…..sound unfair?
To everyone except Kiri Bradley and her trainer, that is, who are tipping her to win.
The 24-year-old is up against tough Cooktown fighter Jacob Witman at today’s BBQ Beat Down at Destination Fitness.
It is her second appearance in the ring and first against a male. But Bradley is not concerned and nor is her trainer Patrick Doherty.
“She’s got great footwork and is one of the hardest workers in the gym, so my money’s on her” Doherty said.
And Bradley herself is not fussed, despite admitting that she promised she would never get in the ring when she began training last April. “I spar guys all the time, so it’s no different,” she said.
“it was like, either we find you a guy to fight or you don’t fight at all, so here we are”.
Bradley ventured down the kickboxing path after being hit while cycling in training for a triathlon. Her bike was a write-off and now Bradley ironically feels safer in the ring.”I wanted to step up my training, but I never thought in a million years I would be fighting” she said.
But, as her training partners all predicted, Bradley is now an addicted member of The Fight Academy and will get her chance today.
The 21 fight card will draw competitors from 11 gyms between Townsville and Cooktown. Rounds are shorter, pads are bigger, officials are quick to step in when it looks like getting ugly and it’s all over before the sunsets.