How to Punch HARDER!

HomeBoxing Tips How to Punch HARDER!

Learn how to punch harder with the correct technique

Watch and learn as the owner of Punch Equipment® teaches you how to PUNCH hard with the correct technique.

Now it’s an often misunderstood concept that a lot of people just think it’s down to sheer effort or just sheer momentum of your hands. It certainly has a little bit to do with it but there is a science to punching really hard.

So first of all we’ll show you the ideal fist position. When your thumb is up and you’re punching with no turn of your wrist, that’s just a quick jab. That is fast but not as powerful as what you can get. A quarter turn is good for saturation work, where you come in and just do a little quarter turn of the fist to get a quick punch in. But when you go for a full power punch, it’s vital that the thumb goes from the upright position and comes out at the very last possible moment. Then it needs to turn down to the floor. So you want that turn in your punches to generate the best power.

Timing is the key

Now, the art of punching hard is all about the timing of the turn. So if you turn early, you’re just going to be pushing. If you leave that turn to the very last possible moment and then just before impact, you turn it over and you combine that with footwork, shoulder turn and hip turn, you’re going to get an easy, effortless, powerful punch.

So focus on turning the wrist to a full palm down position at the last possible second and then work on footwork as well. So that’s the first part of power punching.

There’s another part to power punches that you need to understand which is very often misunderstood and that’s timing. Now, if you hit something as it’s going away or if it’s stationary, you’re not going to get as much power as if it’s slightly moving towards you and that’s timing.

So if you can catch a person as they come in towards you or when you’re training on a bag as it moves towards you or on a floor-to-ceiling ball as the ball comes at you, your punches are gonna feel sweet, crisp and real solid.

If you’re sparring and you wait for the person to come in close and then you hit them right on the head just as they move forward, they’re going to have a doubling of the force. It’s just like a car accident, if the first car is doing 100 kilometres an hour and the other one is doing 100, the impact in the middle is 200 kilometres an hour (double). So it’s just sheer physics if you get your timing right.

I’m going to show you now how I stab my footwork. So as my foot comes forward and I stab my foot into the ground and anchor it, that’s the time for my trigger to turn my fist over. So if I could get my footwork to step and stab as I land that fist turns, it brings my shoulder, hip and my heel all into line.

Use the passive hand

There’s one other thing we can do to add even more power and that’s the passive hand can anchor backwards. So as I throw this foot on the ground and stab this fist over, the fist can turn back. So as I punch, I also pull just like with a hook. I’ll pull with this hand as well. So footwork, the turn of the wrist, the stabbing of the foot onto the ground as you turn your fist and good timing all equate to power.

So I’ll just try and show you a couple of steps. My first one is I’ll step in and as my foot lands, I’ll wait for the bag and step in.

So the footwork, the landing of the fist, the pulling of the passive hand, the hip and putting the shoulder behind a punch, all accumulate with timing to a powerful punch!

We are using the Debt Collectors in this video demonstration. 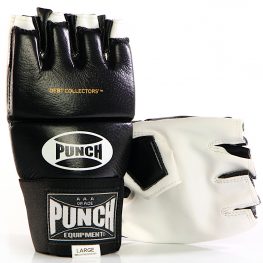