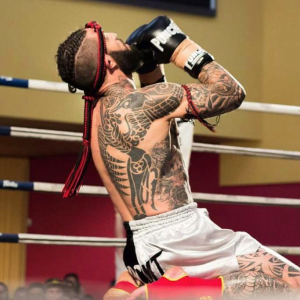 The Meaning of Ram Muay

Before a Muay Thai traditional ring fight the fighters perform a ceremony known as the Ram Muay.  It is used as a warm-up activity and a way of showing respect.

First the Wai Khru is performed. Wai is an action of  showing respect to others by putting the hands or boxing gloves together in a prayer like position (some times combined with ceremonious bowing routine). Khru means teacher.

Then the Ram Muay is performed. Ram means dance in the old Thai traditional style. Muay means boxing. Ram Muay is referred to the ‘dance’ part of the ceremony. When the fighter performs the Ram Muay, their movements demonstrate a fighter’s control and style.  Each fighter performs the Ram Muay on each side of the ring to demonstrate their prowess to the audience.  The Ram Muay is a personal ritual, ranging from the very complex to the very simple, and often contains clues about who trained the fighter and where the fighter is from. Also, in the past Muay Thai was usually fought in front of the King, so Ram Muay was also to apologise to the King for the brutality in fighting.

The fighter may wear a headband called a Mongkhon and armbands known as Pra Jiad during the ceremony, and the Ram Muay may be accompanied by music.  The Mongkhon is unique to Thai boxing and not usually worn in Cambodia or Burma.