Learn how to hold a Kick Shield Properly

Now if you’re using a kick shield at home for personal training or using it at a fight gym, our team is going to run over some simple tips to improve your kick shield holding for when you’re using them in your boxing, kickboxing, MMA or Muay Thai session.

The first type of technique that I’m going to be holding for are front kicks & straight punches etc. which come directly towards the pad.
Basically what I want to do, is hold onto the shield against the chest, with one hand underneath and one hand on top.

Keep The Shield Against The Body!

What you want to avoid doing is keeping that shield away from the body.
We see this all the time in the fitness industry with trainers trying to keep the pad away from themselves.
It’s a very risky thing you can do with the shield.
So bracing the pad against your body by far the safest option.

How To Stand For Frontal Strikes On The Kickshield

So what I’m trying to do here is I’m going to cover one hand on top, well underneath my chin and also don’t cover it up too close, otherwise, you’re gonna feel it very, very quickly. I’m going to put the other hand underneath.
So this is exactly how I’m gonna hold it now for kicks and punches.
As you can see you guys as I’m holding this pad what I want to make sure I do is I keep my stance almost like in a fighting stance and like a rectangular in a square make sure that the leg that’s behind me is keeping that momentum forward so as Lorna kicks what I’m trying to do is put a little bit of resistance into the pad. So if I have my leg standing side by side this is bad okay

Now so again making sure that I have my legs in this rectangular stance it will keep me balanced in every direction. So as Lorna is going to throw that kick, I’m just going to breathe out as that kick comes out towards me and I’m gonna put that pressure just a little bit forward and keep that pad nice and close to my chest.

For punches, again the same thing. I’m going to keep it nice and close into my chest just so you can see Lorna push-up now. Again this is only for straight punches as the pad has that nice curve for hitting jabs and crosses. So whatever punches that Lorna does throw, she can towards my chest, my sternum or towards my body because I bought this nice length she can hit me from all angles oh boy as she’s hitting make sure you breathe out just a little bit no your eyes. So particularly for punches, make sure you hold it around just like so for kicks etc I’ll change up my technique a little bit

What I don’t want to do is put my hands behind the punches when I’m holding for techniques like straight punches. The reason being is I want to keep that pad nice and close to my chest. With my arm underneath this pad, this actually gets in the way of Lorna being able to hit a crisp punch. Even though I’m holding it close to my body and it looks secure, I’ve got a lot of movement in this pad. I want to keep it nice and tight so in that way when Laura does throw the straight punches, there’s very minimal movement in this pad and she can get a real reaction from me when I’m trying to hold it back.

So I’ll show you just to see how it looks. So again it’s okay, it’s comfortable but it is hard for me to control this pad. If that punch slips off to the side, that pad is really going to move.

What I want to try and do is again switch my hands, one hand over the top one hand under the bottom. It’s much more secure and everything is pushed against the body, making it easier for me to feel that resistance

Okay, so the next technique we’re going to work on guys is low roundhouse kicks. This is a very, very safe and easy kick to start with your clients after a front kick. So what we’re going to do is whenever I’m holding for a leg kick basically I’m going to keep that leg in front. Predominantly in fighting, they’re always trying to attack that leg that’s in front as it’s closest to them when they’re striking. So what I’m going to do with Lorna as she’s a southpaw, I’m going to make her work off her back leg to start with because it’s going to be more comfortable for her to push off.

If you’re trying to attack from the front, which you can do as well, take your time. I can put it in the front of my quad, this is really attacking the front of the way. So as I said before, make sure the opposite hand is in front and the other hand or forearm on top. As it comes, give that little bit of resistance as she’s coming in and a little bit of a breath out to.

The good thing about leg kicks is as people get more advanced, you can change the angles up a bit. I can turn a little bit more to the side of the thigh if they’re trying to keep the back of the leg and the front. So I’m going to change the angle a little bit and see how long it goes for as well.

Roundhouse kicks to the body

So the next kick shield holding technique we’re going to go over is roundhouse kicks to the body. There are many different ways for you to hold, this, in my opinion, the safest way for you to try especially for beginners. So basically what we’re going to do is hold the kick shield similar to how we would hold a Thai pad. With the bottom of the shield, what I’m gonna do is dig it into my hip and this allows an even more stable base.

So basically leave my pad at the top for my hand grabbing and I’m gonna double grip the top handle with my hands. Then keep my elbows in behind it, very similar to how I hold a Thai pad. With the bottom of the shield, I’m going to hold this into my hip so as Lorna kicks, I have stability in the bottom of the shield and also in my forearms as well. Keeping my elbows back will make sure when that kick comes, I’m not going to hit with the foot and I can provide a little bit of resistance pushing down as I’m using the kick shield as well.

So we’ll show you from here how we’re going to hold it. So again just like a Thai pad, I’m gonna push that down just a little bit as Lorna kicks. Again, my base at the bottom of that pad is still sitting on my hip I’m just going to let her come for me to be able to push back just gently. Again just the kicks to start with. We can do the same with a switch kick so I’ll pop it on the other side for you guys to see as well.

Now when I’m holding this two guys I don’t want to hold it too much in front or too much of the side of the start. Think of it like a 45-degree angle if I’m kicking a bag, that bag is round.
It’s the same thing with how I’m going to hold it for a kick shield. I’ll hold it a bit more of that 45 and she’s not gonna be able to kick straight across me because I’ve got width and in front, it’s gonna be too awkward for a roundhouse kick to start. So I want to aim that pad almost at a 45 direction with whichever leg that Lorna is going to kick with.

So again, pushing down on that pad. Also from here, I can turn around the side and I can make my client try and do power shots to the body with rips or something like that as well so we can show that from. Obviously, a Round Shield is the best tool to be able to use for that but if you’ve only got the kick shield it’s a great substitution as well

Holding A Kick Shield For Knees

When holding a shield for knees, hold the kick shield similarly to how I hold it for straight punches, front kicks, side kicks and basically anything that’s coming straight, directly towards the body.
Essentially holding the shield with one hand on top and the other hand underneath.

What I see a lot here in the PT industry as well and this is a big no-no is holding it away from the body and asking for your clients to grab it. If they grab this pad, they can pull you down with it so I’ll show you how it’s going to not look like to start and I’ll show you what can typically happen. So as I hold for here in front I see a lot of people holding out here like this and what Lorna can do she can grab from and anything that requires grabbing, I want to keep that close to my body so I’ve got more strength. If it’s here away from the body and she uses one hand or two hands to pull, I can’t fight against that resistance there’s way too much in her. So if she starts to throw some knees or grab on, this is very uncomfortable for me to try and hold and she pulls my body weight down.

What’s safer for me, is keeping it in front and even if she grabs, she can use me as the target. Because she’s obviously going to be clinching with a person, it’s much more safe for her to grab the real thing than it is to try and grab that target that is too far away from the body. don’t hold that pad too much underneath the chin as it will hurt. Try and keep it right in front of the sternum. Even for clinching the same thing if she grabs around, once I have that pad against my chest, there’s a lot more of a barrier in between it. Depending on which pad that you use, make sure there’s obviously a lot of padding inside of it otherwise if you use a thin pad you’re gonna feel that knee coming no matter where it’s coming from.

How to choose a Kick Shield

If you’re not sure which kick shield that you need to use for your training, read our full review of our Kick Shields or watch the video below. 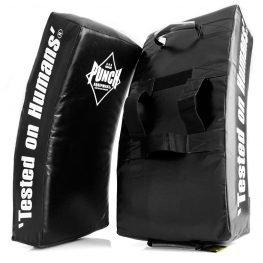