Wanna Be A Kickboxer Challenge 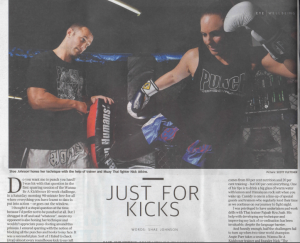 Follow Queensland’s, Gold Coast Bulletin writer, Shae Johnson as she writes about her journey to fight night. Shae hones her technique with the help of trainer and Muay Thai fighter Nick Atkins (pictured).

Do you want me to punch you hard? I was hit with that question in the first sparring session of the Wanna Be A Kickboxer 10-week challenge. In a Saturday morning 90-minute free-for-all where everything you have learnt to date is put into action – or goes out the window.

I thought it a stupid question at the time, because I’d prefer not to be punched at all. But I shrugged it off and said ‘whatever’, aware my opponent is also honing her technique and wouldn’t appreciate pussy-footing around this princess. I entered sparring with the notion of blocking all the punches and hooks to my face. It was a successful plan. Sor of. I failed to check (stop) almost every roundhouse kick to my left thigh and the consequence of such ignorance is a rather large, colourful and swollen bruise. It reveals Paul Gallen’s buttock bruise.

But you learn quickly to cop it all on the chin, so to speak. It’s not personal, and all those girls that threw their punches and connected their kicks are my friends who motivate, support and inspire me every session (along with ice packs, anit-inflammatories and arnica cream). And I’d like to think I give it back – the punches, kicks, and inspiration that is – just as good. I’ve also learnt there is so much more to Muay Thai fighting than the kicks and punches. There is discipline, respect, strength, conditioning, co-ordination and nutrition.

One Fight director Craig Cassidy provides tailored nutrition plans for elite athletes, especially fighters, like us. He talked to us Wanna Be’s about the principles of healthy eating, making smart choices, what foods to consume and avoid, and how to develop a lifestyle choice we can follow for the rest of our lives. He doesn’t believe peak performance comes form 80 percent nutrition and 20 percent training – but 100 percent everything. Once of his tips is to drink a big glass of warm water with lemon and Himalayan rock salt when you wake up. Cassidy is one in a line-up of special guests and trainers who regularly lend their time as we continue on our journey to fight night.

I was privileged to have undertaken pad work drills with Thai trainer, Pajuab Kru Juab. HJis help with developing my technique and improving my lack of co-ordination has been invaluable, despite the language barrier. And funnily enough, half the challengers fail to turn up when two-time world champion Angie Parr takes a session. Wanna Be A Kickboxer trainer and founder Nick ‘The Nightmare’ Atkins is a dream compared to Angie. I’m not sure if it’s her threats to punch us or her threats to hit us with a baseball bat (blue and plastic and borrowed from a toddler) that keeps the others in hiding. But it sure as hell makes my arms do as they’re told.